not the trombone player

Fitting the Engel MR40F into a Land Rover Discovery 3/4

If my article on the Lock & Lock Boxes in the MR40F has made you buy a fridge you might now wonder where to put it in your car. For most cars, I cannot help – but if you happen to own a Discovery 3 or 4 (they’re called LR3 and LR4 respectively in the US) I can at least tell you how we do it.

What we do not have

Really cool guys live in South Africa or Australia and are challenging the great outdoors all the time. These guys put their fridges in the boot of their SUVs and use sliding attachements to get access to the fridge (see here for an example).

What we do have

We live in Switzerland and are a lot less cool, but also, we want to access the fridge all the time, to have a cold drink, sandwiches or simply quick access to it during a spontaneous stop. So putting it into a full trunk is not an option, and usually we put the fridge on the back seats between the kids (for safety reasons the fridge is tied down securely, I am sure I don’t have to mention that).

It irked me a bit, however, that we have the huge and heavy middle seat under the fridge, which is somehow lost space and dead weight. But even if you remove the middle seat and put the fridge on the floor, the space emptied is now above the fridge and still not very usable. So I was reluctant to do it (even asking in the disco3.co.uk-Forum whether it’s worthwhile). When I tried it out I was not convinced, really. Travelling Iceland we had it on the collapsed seat, travelling Scotland we had it on the floor – no big difference somehow. And fixating the thing was a bit more tedious on the floor, somehow.

This year I decided to give it another try, having bought the Engel Transit Slide Lock in an attempt to ease the problem with fixating the fridge. It slides in there and is secured, so using the lashing belts is reduced. (Yes, I still keep the fridge tied down, I am like that obviously.)

To fix that Slide Lock thing I needed a plate, just like the one in the disco3-thread above, but being not a skilled metalworker (actually I am pretty unskilled with everything) I chose wood. And if you want to do it yourself, here are some useful measurements: 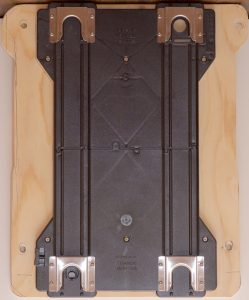 The Slide Lock mounted on the board 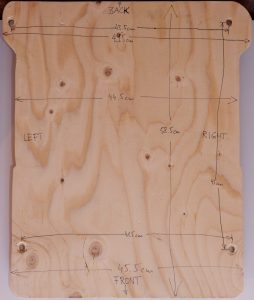 The board from below, with measurements in cm.

Measuring and logging temperature on the cheap